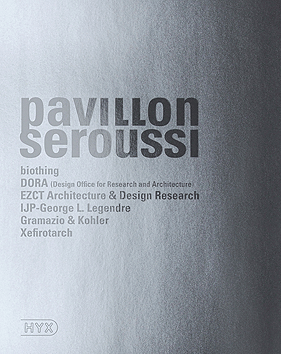 This book has been published on the occasion of an international architectural contest for construction of an art collector's house. Natalie Seroussi brought together six out of the most innovative young architectual firms in order to design a pavilion intended to house her art collection. Those six firms have a common point , all of them actively using the profound changes brought about by the introduction of intense software-based processes into the very heart of modern architectural practices, as all of them integrate computational procedures, that is, processes based on an intense application of computer-based calculation algorithms. The use of formal programming languages and the exploration of advanced specialised software seem to have completely redefined the principles of architectural design.

The primary ambition of Pavillon Seroussi's book is to shift the focus of the architectural discourse towards the modern production tools issue. The architects gathered here share a context rather than a style and through their production define what could be expressed through the idea of " production ecology ".

The project by IJP - George Legendre is an entity of periodical mathematical functions which define the dimensions, the shape and the nature of spaces. The one by Xefirotarch is a product of variation on formal experimentation. The said variation brings together (almost paradoxically) high-tech and a romantic approach which implies intuition, imagination and feeling. Fabio Gramazio and Matthias Kohler have imagined a house of glass which encloses a "brick core".

The use of robotics in the construction process extend the computational algorithms all the way to the last stage of architectural production : the implementation. The pavilion imagined by biothing centers on the model of electromagnetic fields around points of attraction and repulsion defined by the site's characteristics. The interior of the house is designed as a sort of a maze where living spaces are interwoven so that the boundaries between the interior and the exterior become vague.

EZCT reintroduces the issues of naturalism by systematically integrating logical patterns present in nature. An image of seemingly liberated nature is superimposed over the rigorous execution of computational algorithms. The project of DORA is buit around the most elementary of geometrical objects : the point. The walls, the envelope as well as the structure and the skylights inside the building are drawn around a group of points. The latter two projects were chosen by Natalie Seroussi and the jury which included Claude Parent and Andrea Branzi.